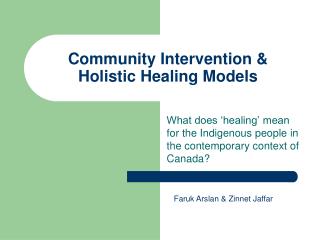 Community Intervention & Holistic Healing Models. What does ‘healing’ mean for the Indigenous people in the contemporary context of Canada?. Faruk Arslan & Zinnet Jaffar. The Contemporary Context. From Screening to Functional Assessment: A Response to Intervention Model - Comprehensive, integrated, three-tiered

Response to Intervention: Everyone serving everyone - . assessing learning and the learning environment. andrew shanock,