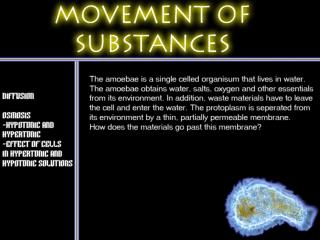 Diffusion. Movement of Substances. Imagine that you are in this situation. Your mother broke a glass of perfume and you, who is studying in the same room, gradually begin to smell the scent of the perfume…. Diffusion.

a, b, c, d all move solutes by diffusion down concentration gradient - . final mechanism can work against gradient e.

Language - . 言語ユニット. why geographers study language. provides the single most common variable by which

Language - . 言語ユニット. why geographers study language. provides the single most common variable by which

DEVELOPMENT OF THE CIRCULATORY SYSTEM - . i. develops relative to embryo ’ s needs. a. during early development

Diffusion - How things get into cells: principles of diffusion, osmosis, and the nature of biological membranes.

Diffusion &amp; Osmosis - . define diffusion. diffusion. the movement of molecules from a area in which they are