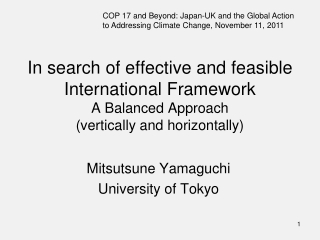 COP 17 and Beyond: Japan-UK and the Global Action to Addressing Climate Change, November 11, 2011. In search of effective and feasible International Framework A Balanced Approach (vertically and horizontally). Mitsutsune Yamaguchi University of Tokyo. Today’s presentation. Are we on track?