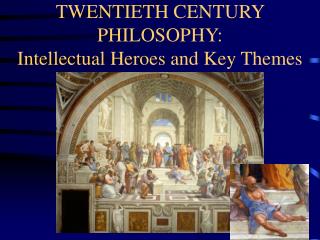 Edna St. Vincent Millay - . how is she famous? she was the first woman to openly question, in her poetry, and her life

The Harlem Renaissance - . famous quotes. “if a man is not faithful to his own individuality, he cannot be loyal to

what are the differences between heroes and role models? - . heroes. role models. the heroes do things that the other

A Righteous Fist - . reflections: the boxer rebellion. “a righteous fist,” an article in the december 2010 issue of

Paul’s Letter to the Romans - . episcopal church of the resurrection may 19-june 23, 2011. sections in this class. may

PHILOSOPHY OF LANGUAGE - . how to talk about talk. what is the philosophy of language?. language and thought: could we

The Romantic Period of American Literature

Art in the Twentieth Century - . plymstock school history department. aims:. how can historians use art as a