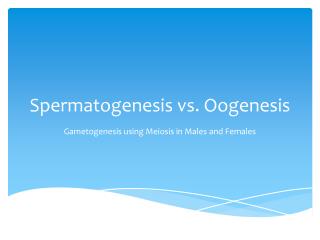 Chapter 2 GBBE Part III Cell Division by Meiosis : The Basis of Sex - . objections of this section: meiosis vs. mitosis

GAMETOGENESIS &amp; FEMALE CYCLES - . objectives. by the end of the lecture, the students should be able to: define

Implantation,conception, development of placenta and establishment of fetomaternal circulation - . gametogenesis.

Chapter 25 - . reproduction and development in humans. (i) female reproductive. system. terms . gametogenesis. the

Meiosis Formation of Gametes - . facts about meiosis. daughter cells contain half the number of chromosomes as the

Ch 27: Reproductive System - Goals: identify the structures of the male and female reproductive systems, including the