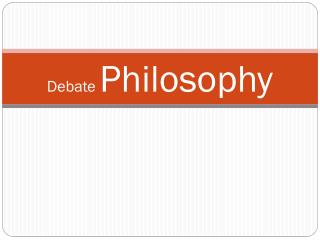 Debate Philosophy. Psychology. The study of human behavior. Psychologists look at people’s emotions and mind to understand what motivates them. Example. A psychologist might have evidence that shows people feel safer in cities with the death penalty. Philosophy.

Philosophical Debating - . 101. what is a debate. a formal method of presenting an argument(s) in support of or against a

Philosophical Questions - . philosophy, the “love of wisdom,” is an essential component of cognitive science. today

PY226: Philosophy of Science - . [f]alsificationists like myself much prefer an attempt to solve an interesting problem

Philosophy of Mind Seminar… - . the authors. note: the following has been abstracted from the grolier encyclopedia.

Learning Aims: -To reflect upon, debate and discuss some key issues in the Philosophy of Mind. - Learning aims: -to

Welcome to the philosophy of life paper! - . do now: freewrite . what are your thoughts about…?. fate soul mates

Debating Topicality - . keeping order. what is topicality?. a gateway issue says that the affirmative plan is not an

Philosophy OF MIND - An introduction to. philosophy of mind. this is a metaphysical question. the question we are

Study Guide GST 102 Introduction to Philosophy and Logic - General information. it is mandatory for students to read and

Philosophical Chairs - Rules of philosophical chairs. make sure you understand the central statementlisten carefully when

Philosophies - . common philosophies used in ld debate. utilitarianism. what it means: the most moral action is the one