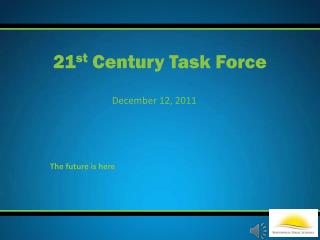 Skills for the 21st Century - . main points. a new renaissance is upon us career development is workforce development

21 st century - . by: robert hackman. table of contents. basic orientation. one thing i learned is how to screen shot

The 21 st Century is Here! - . the clerk’s digital courts

A New Vision for 21 st Century Education - 21 st century skills as a vision for k-12 education: what should schools and