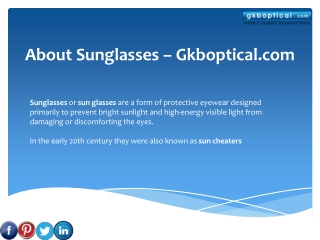 Myths About Polarised Sunglasses - Checkout the myths about polarised sunglasses.

Breaking Some Myths About The Sunglasses - The popularity of sunglasses is growing, certain myths are also floating

3 Things to Know About Sunglasses - For more than three decades, gangar eyenation has been a name that has merged

Sunglasses - . a where project by: heather bradshaw. why do people wear sunglasses?. to protect themselves from

Polarized Sunglasses vs. UV Protection Sunglasses - The reason we are here with a blog about the difference between the

Goth Sunglasses - My funky sole is providing goth sunglasses for all are people and the lens have like a mirror effect.