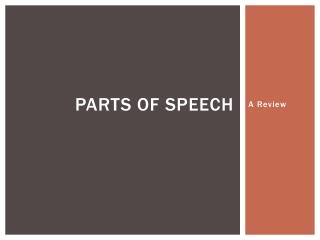 Parts of Speech - Grammar review. parts of speech. why learn grammar? . people are often judged on their speaking and

Clear and present danger (test) - . a legal interpretation that reconciled two views of the first amendment right of free

Laryngeal Function and Speech Production - . learning objectives. describe the basic role of the larynx in speech and