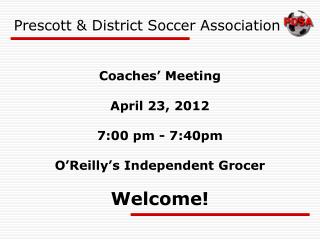 The idea of Robot Soccer - . what is ai?. research in ai includes: design of intelligent machines formalization of the

AWARDS OVERVIEW - . created by the member recognition committee of the cali-nev-ha district. 2010-2011 district

“DEVELOPING THE YOUTH SOCCER PLAYER” The stages for the soccer formation from 6 to 16 years of age - . bruno redolfi

3D-Biomechanical Analysis of the Soccer Kick - . introduction. we chose to look at the biomechanics of the soccer kick