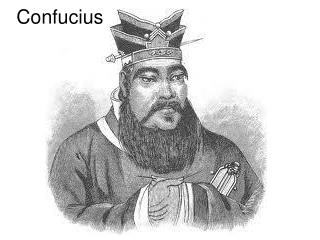 Confucius. Biographical Info. Confucius was born in 550 BC near the city of Qufu. He got through his childhood in poverty by meditating a lot. He was a Chinese teacher, philosopher, and political theorist.

Confucius - . vocab practice. working in pairs, create an acrostic poem or complete a word interview for your word.

Confucius - . a way of life: “i want you to be everything that’s you, deep at the center of your being.” confucius

Confucius - “everything has beauty, but not everyone sees it.”. “choose a job you love and you will never have to

What is Confucianism? - . confucianism. based on the teachings of confucius, a chinese philosopher. born in 551 b.c. died

Confucius &amp; Confucianism - . dong shuai. which of the following philosopher do you think were living as closest

What is Confucianism? List three main teachings of Confucius and describe WHY they are important. - Summarize. compare,

Confucius : The Analects - . a guide to the everyday enlightment. a glimpse of the

Confucianism - . 3. t am. alexander sun. kenneth wong. johnny ho. what is confucianism?. confucianism- “the school of