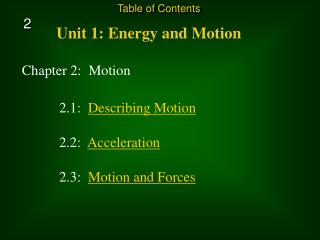 Chapter 2: The Laws of Motion - . what do you think? agree or disagree?. lesson 1: gravity and friction. force. a push or

Chapter 2 Motion in a Straight Line - . linear motion in this chapter we will consider moving objects: along a straight

Chapter 2: Motion Along a Straight Line - . ap physics miss wesley. objectives. in this chapter you will be able to have

Representing Motion - . chapter 2. 2.1 picturing motion. what kinds of motion can you describe? how do you know that an

Physics Ch. 2, Motion in One Dimension - . one dimensional motion: something moves forward or backward. *reference point:

Chapter 2 - . motion along a straight line. modifications by mike brotherton. goals for chapter 2. to describe

Chapter 4 Linear motion - . 1) you can describe the motion of an object by its position, speed, direction and

Chapter 2: Describing Motion: Kinematics in One Dimension - . topics we will cover in this chapter: reference frames

Unit 2: Motion-- Speed and Velocity and Acceleration - . what’s the difference between distance and displacement?.

Chapter 2 Kinematics: Description of Motion - . a bit of terminology … kinematics (the topic of the next two chapters)