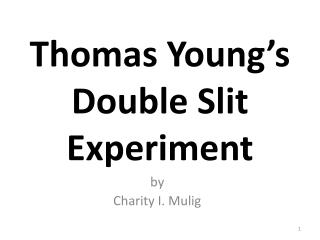 Thomas Young’s Double Slit Experiment. by Charity I. Mulig. Historical Backdrop. Publication of Christian Huygen’s treatise on light (1690). He believed that there is a medium between the eye and the objects and the object does something to cause an effect in that medium. .

What is Light? - . light is a wave!. interference in phase = constructive out of phase (180 degrees) = destructive thin

Resolution - . double slit review. in our analysis of the double slit interference in waves we assumed that both slits

A P Physics Monday 14.04.28 - Warm up if a double slit experiment was done using a 450 nm laser, while shining through

A Science Center To Go scenario for High Schools : the double slit experiment - . light and matter are both single