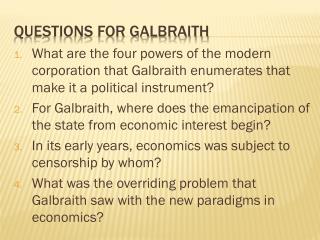 What are the four powers of the modern corporation that Galbraith enumerates that make it a political instrument? For Galbraith, where does the emancipation of the state from economic interest begin? In its early years, economics was subject to censorship by whom? Answering the Three Economic Questions - . what key economic questions must every society answer? what basic economic

Growth, Productivity, and the Wealth Of Nations - . chapter 8. laugher curve. we have two classes of forecasters: those

Essential Questions of Course: - . course units. upon completion of this course, all students should be able to answer

Call of the Wild - . scavenger hunt. curly. questions- match the answer to the question on your review sheet (you

The Beasley Method - . strategy for passage-based questions. introduction. inspiration of the “beasley method” what