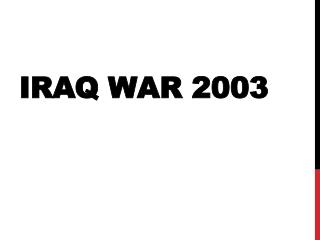 Operation Iraqi Freedom - . operation iraqi freedom. in 2003, the us launched an invasion of iraq, after claiming that

Extra Credit - . directions:. write a 10 sentences (half page) about the film describing the plot and what you thought of

MARCH 19, 2003: Bush launches invasion of Iraq - . the fighting began with an aerial bombardment. us ground troops

Issues for NATO today 1 The War in Iraq - . the war in iraq 1. iraq under saddam hussein had engaged in two previous