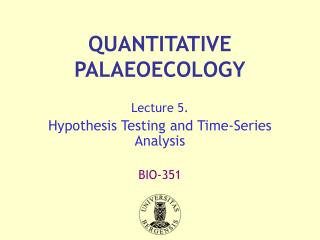 QUANTITATIVE PALAEOECOLOGY - . lecture 1. introduction bio-351. contents. what is palaeoecology? what are

Pioneering Polymaths in Ecology, Biogeography, and Palaeoecology - . john birks. the past is a foreign country – david