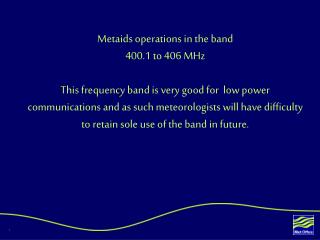 Metaids operations in the band 400.1 to 406 MHz This frequency band is very good for low power communications and as such meteorologists will have difficulty to retain sole use of the band in future. . Metaids operations between 400.15 and 406 MHz. Navaid radiosondes [Loran-C or GPS] Transitioning Capabilities between NASA Research and NOAA Operations - 2. background. the transition between nasa

Relation between CEN standards and performance based operations - . by jp michaut colas’ group. what are the