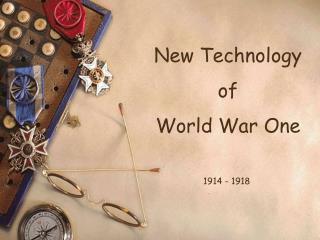 New Technology of World War One New Technology of World War One

Weapons of WWI - . machine gun. the machine gun was a fairly primitive device when general war began in august 1914.

World War II Technology - . researched and written by tomas munarriz. what technology was used during the events of world

World War 1 Timeline and Trench Warfare Summary - . by: camron tye. archduke ferdinand and his wife in serbia, from

World War One Technology - . world war one technology. in 1914, many people thought the war would be done by christmas!

WORLD WAR I - . spoils of war. t he assassination of austrian archduke franz ferdinand by a secret serbian society