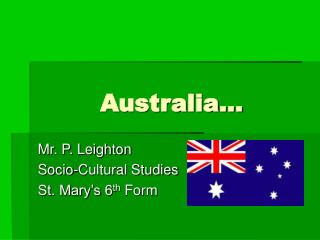 Australia…. Mr. P. Leighton Socio-Cultural Studies St. Mary’s 6 th Form. Today’s Session…. Understand the key aspects of Australia: Quiz to start… Sport as a pre-occupation in Australia- why are they so much better than us? Why is sport so high status in Australia?. Quiz….