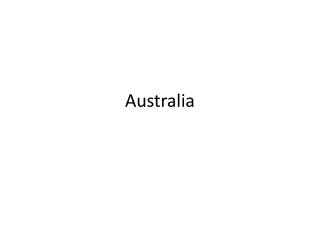 Australia. Federation. The country of Australia was formed in 1901, and a parliament was made. The Australian constitution was set up, and Australia became a Commonwealth country. World War One Wartime Industry in Scotland - . lesson starter: what are the five biggest industries in the uk? (sectors

Australia - . g’day ! welcome to our project on australia. molly , stacey, melissa, jodi and ava worked on this

Australia in the Vietnam War Era - . why did australia get involved?. since world war two australia had allied itself

Australia’s Government - . australia’s government. australia has a federal parliamentary democracy. there are three

Australia the country By Colin Mrs. Kringer - . the capital of australia is canberra. canberra is in the state of new

Australia for - Icsmge 2017!. sydney, australia has announced it will bid to host the conference of the international

Mission Australia - . mission australia is a non-denominational christian organisation, which operates more than 300