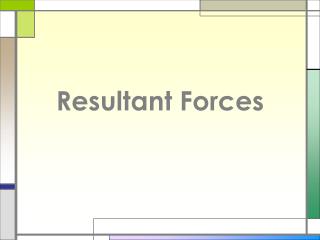 Resultant Forces. If two forces act together on an object, their effect may be described as the action of one force. EXAMPLE. Two forces of magnitude 5N and 6N act on a particle. They act at right angles. Find the magnitude and direction of their resultant. EXAMPLE. Resultant Forces - . what effect does an overall (resultant) force have on an object? . what forces are being shown by

What is the resultant of a pair of forces 100N upward and 75N downwards? 25N up - . why is speed scalar and velocity

Resultant force on a submerged curved surface - . it is most straightforward to calculate the horizontal and vertical

Properties of Division Polynomials and Their Resultant - . presentation for masters talk. background. david grant wrote a