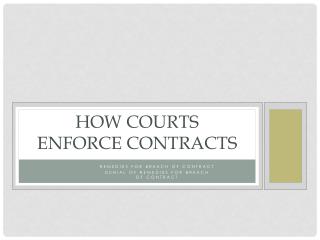 How will we enforce AB32? - . it's tough to make predictions, especially about the future. yogi berra. ab 32 timeline.

How To Enforce Your U.S. Patent - . presented at: patentgruppen Århus, denmark date: october 25, 2011 presented by:

How Contracts Arise - . what is a contract?. a contract is any agreement enforceable by law. never enter into a contract

How Contracts Arise - . what are contracts? any agreement enforceable by law. six elements of a contract.  proposal

How To Enforce Your U.S. Patent - . presented at: patentgruppen Århus, denmark date: october 25, 2011 presented by:

Courts - . 2/28/2012. clearly stated learning objectives. upon completion of this course, students will be able to:

COURTS - . judges, precedent and the common law. common law used in countries that have derived their legal system from

Contracts, Contracts, Everywhere! - . some pointers on what to expect in a research contract. what’s up with

State Courts v. Federal Courts - . mini review . stack the following courts with the trial court on the bottom and the

Welcome to the Network Legal event - ‘To enforce of not to enforce’ - . jennifer watts network legal expert setting