Why is the USA getting so sick? - PowerPoint PPT Presentation 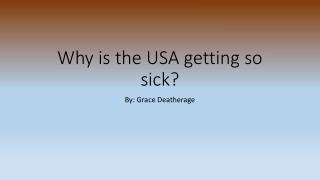 Why is the USA getting so sick?

1 / 16
Download Presentation
Why is the USA getting so sick?
86 Views

Why is the USA getting so sick?. By: Grace Deatherage. The Answer is unsafe Additives Food additives are substances added to food to preserve flavor or enhance its taste and appearance However, unsafe Additives, such as: MSG BHA and BHT Sodium Nitrate Artificial Food Dyes Propyl Gallate

Why is the USA getting so sick?

In a World Full of Germs How Do We Keep Ourselves Clean? - . when was the last time you were sick?. did you have:

Anointing of the Sick

How Bacteria Make Us Sick - . exposure. a bacterial cell has to first enter our body, this can happen through:.

What makes us feel sick? - . http://www.youtube.com/watch?v=ytoii3-p-ni&amp;feature= youtu.be. how do germs find us?.

Sick and Suffering - . by: aditi bahali and leah kracke. introduction. the world health organization(who) “every state

The Work of Visiting the Sick - . introduction. one important work of the church is “visiting and attending the

Anointing of the Sick - . part 1. suffering. “illness and suffering have always been among the gravest problems

Prayer for the Sick - . father of goodness and love, hear our prayers for the sick members of our community and for all

Why Did Visitors at Magic Mountain Get Sick? - Last week, 36 people at magic mountain were rushed to the hospital due to

Influenza 101 - . influenza. the flu (influenza) is an infection of the nose, throat, and lungs that is caused by