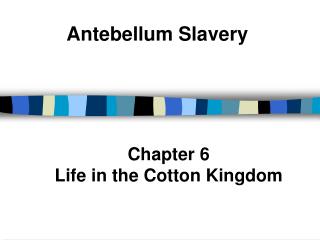 Antebellum Slavery. Chapter 6 Life in the Cotton Kingdom. What does Antebellum mean?. A period of time before a war, usually refers to the American Civil War. 1820 – 1861 (start of Civil War) for reference purposes only. Section 1: The Expansion of Slavery. Antebellum Slavery - . antebellum – refers to the time period before the american civil war by 1830 - 2

ANTEBELLUM SLAVERY - . 1840-1860. goals:. discuss slavery as it existed within nc explain purpose of the slave code

Slavery during the Antebellum Period - . by tatiana dalton and geneva cann. cotton gin. a machine that quickly

Antebellum - . unit 5.4. events leading to the civil war. antebellum – the period before the war sectionalism the

Antebellum - . slavery in the deep south agriculture cotton is king! life on the plantation resistance to slavery.