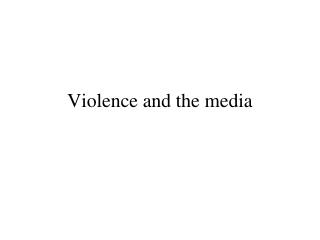 Violence and the media. Source: US Bureau of Justice Statistics. Recently seen on broadcast or basic cable:. A doctor with his arm severed by a helicopter blade Two teenagers high on drugs kill a classmate—then eat him

The effects of watching violence in TV on Children in Kuwait - . powerpoint presentation, by atharee efs 162/53