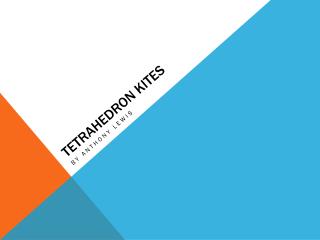 A Formulation of Generalized Node , a Quadratic Tetrahedron/Triangle with only Corners, and Meshfree Approximation with

Tetrahedrons What are they and how do we use them? - . courtney shafer and mellissa toothman. what is a tetrahedron?.

The Geometry of a Tetrahedron - . footnote 18:section 10.4 mark jeng professor brewer. what is a tetrahedron?. a

Mineral Structures - . the [sio 4 ] 4- tetrahedron. silicates are classified on the basis of si-o polymerism . mineral