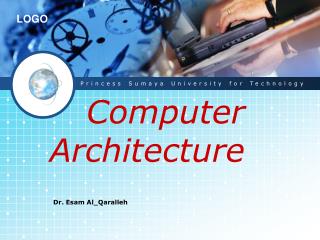 Princess Sumaya University for Technology. Computer Architecture. Dr. Esam Al_Qaralleh. Review. Course Syllabus. Grading The first priority: Maximize Learning Your grade will depend on how much you have learned 2 midterm exams (40% to 50%). Quizzes and homework's (20% to 10%).

Computer Systems Architecture - . lecture 1: what is computer architecture?. goals. understand the “how” and

The Concept of Computer Architecture - . evolution and interpretation levels of abstraction hierarchical framework