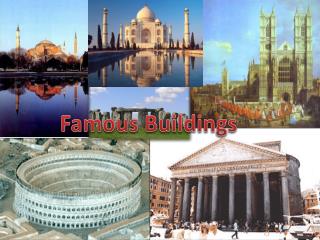 Famous Buildings. Stonehenge. Probably the most famous Neolithic Structure is Stonehenge in England. It’s purpose is unclear. Was it used for sacrifice, or to keep track of the cycles of the growing seasons? . Sumerian Ziggurat. Famous Buildings - . by ella martin. the eiffel tower. • built in 1887. • w as named after gustave eiffel, its

Famous Buildings of the world - This is the printable version. this is a verison that is meant to be printed out. there

Famous Buildings of the World - . featuring the taj mahal, eifel tower, roman coliseum, and the empire state building by:

15 World Famous Buildings To Inspire You - From one world trade center to burj khalifa, we always get inspire by these

Buildings - . a house. a bungalow. a block of flats. types of houses in england. click on the link to see further

Buildings - . buildings. what makes these buildings look interesting?. what type of building are these?. many