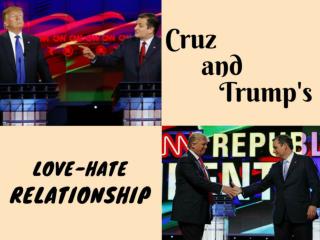 In an abrupt shift Ted Cruz endorsed Donald Trump saying he is the only candidate who can stop Democrat Hillary Clinton from winning the White House.

Kleem Kamdev Mantra For Love And Relationship - As we all know that kamdev is the god of love, attraction and

Hate &amp; Love - . what is hate?. hate defined -- to feel hostility or animosity toward. to detest. a feeling of

Social Media – love it or hate it, we need it - . lai/cilip ireland conference 2012 phil bradley. what is social

The First Love - . nguyen ngoc thao ly automation testing. have you ever loved someone?. do you still remember the first

The Most Controversial Book in America - . our love/hate relationship with the adventures of huckleberry finn. ms.

The Media - . a reliable source?. politicians &amp; the media. a love-hate relationship. u.s. &amp; the world.

Hate is Not Us - . stories from the mid-city campus. stop the hate/hate is not us. many countries, many cultures, many

Poem or Song? - . i hate you with a necessary hate. poem. “the destroyer of a soul” lionel johnson. when i am dead,

Love &amp; Hate - . analyzing the portrayal of the turkish military’s interaction with the eu in turkey’s print