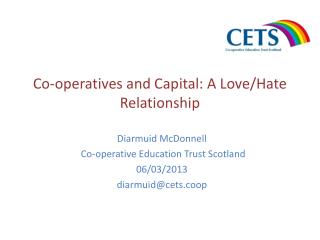 Co-operatives and Capital: A Love/Hate Relationship

Co-operatives and Capital: A Love/Hate Relationship. Diarmuid McDonnell Co-operative Education Trust Scotland 06/03/2013 diarmuid@cets.coop. Outline. What is a co-operative? Relationship between labour and capital How do you establish a co-op ? What are their capital requirements?

Co-operatives and Capital: A Love/Hate Relationship Economics for Democratic Socialism - . drexel university spring quarter 2009. why this course?. the economic crisis of

Love or Hate? - . 1 corinthians 13. love suffers long. love means we are willing to suffer through some trials for the

Uncovering Freemasonry - . by: brother timothy, ontario, canada. in ontario, there are 57,664 masons and 611 lodges. the

Week 6 - . capital markets research and accounting. learning objectives. upon completing this topic you should be able