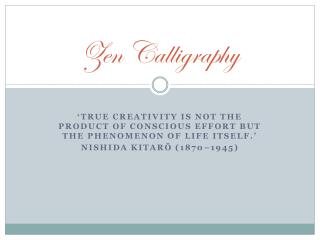 Zen Calligraphy. ‘true creativity is not the product of conscious effort but the phenomenon of life itself.’ Nishida Kitarō (1870–1945). What is Zen Calligraphy?. Calligraphy - . the art of beautiful writing. vocabulary - words you need to know. versel : an individual letter.

Arabic Calligraphy - . حسن الخط العربي. in calligraphy the production of the character is an artistic act.

Zen - . important points to remember!. the indigenous religious tradition of japan is shinto it is based on worship of

ZEN - . zen buddhism is: “ a direct transmission outside tradition and outside scripture: no dependence on words,

Chinese Calligraphy Scrolls - Decorate your walls with our attractive chinese calligraphy scrolls. we have an authentic

Zen - . so what is it?. “zen,” is beyond definition and logic. it is at the same time a particular teaching of