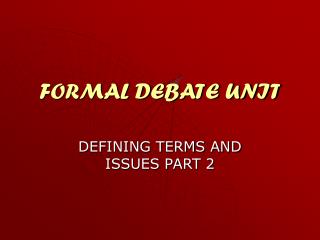 FORMAL DEBATE UNIT. DEFINING TERMS AND ISSUES PART 2. DEFINING TERMS. Make sure you define all necessary terms in your proposition in the affirmative to make sure both sides apply each argument to an agreed upon definition Prompt and precise terminology is essential to good analysis in debate

GOP debate without Trump - Trump may have been physically absent from the debate, but his shadow loomed

The first Great Debate between Idealism and Realism - . grand theories of international