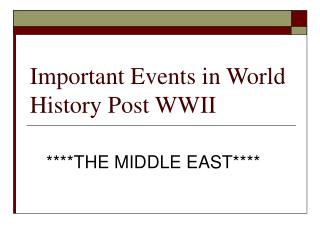 Important Events in World History Post WWII. ****THE MIDDLE EAST****. The Russians in Afghanistan. Event #1. The Soviets in Afghanistan. USSR invades Afghanistan To install a pro-Soviet leader Would become the USSR’s “Vietnam” – led the downfall of the USSR AP World History: Decolonization and other Key Events Post WWII - . period 6: 1900 – the present. the road to

The Post WWII World - . part i containing communism. the cold war. what was it &amp; why did it happen? part i. what

Post WWII - . the cold war and rise of the civil rights movement. questions. what was the “cold war”? how would you

Post WWII - . containment at home &amp; domestic policies do now: why did the united states intervene is guatemala.

Post WWII - . post war treaties. wwi – wwii – . conferences. during and after wwii a series of conferences were held

EVENTS OF WWII - . years of crisis. operation sea lion. german plan to take over britain they were going to land 25