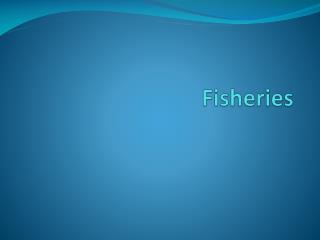 Fisheries. Canada’s Fisheries…. http://www.youtube.com/watch?v=to4ahF8VUtU. Fish as a Resource:. Fish are a renewable resource – that means with proper management the resource could last forever…. History of Fishing in Canada:.

Fisheries and Fishing Techniques - . what are fisheries?. a fishing ground for commercial fishing. where are most

Research and innovation in fisheries and aquaculture : - Priorities in science , industry and society in the context of

FisheRies - . what i use r for. current work: gamms with bayesian spikeslabgam estimator to improve egg larvae biomass

Department of Agriculture, Forestry and Fisheries - . report from the fisheries branch to the portfolio committee 19

The Impact of F ishing Industries and Sustainability of Fisheries - . by: katie wallace &amp; lindsey bell. what is a