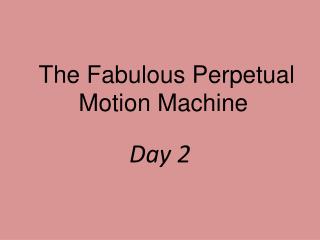 The Fabulous Perpetual Motion Machine. Day 2. Concept talk . How do inventors inspire our imaginations?. Partner Share. Have you ever suggested ways a product could be made better? What are some ways to prove a theory? Perpetual Motion - . by: wes house. perpetual motion ?. the motion of a theoretical mechanism that, without any losses

Ecosystems: Nature’s Answer to a Perpetual Motion Machine - . could this ecosphere be considered an “ecosystem”?.

Special Topic : Perpetual Motion &amp; The Laws of Thermodynamics - Note ! the following lecture is still under

The “Perpetual Question” - . future-proofing library experience for the first college year. what is the ‘perpetual

“The 'Fabulous' RAVE” - &quot;the rave&quot; has been together since early 2012 and has performed at

Media Influence: The perpetual minefield - . what is social