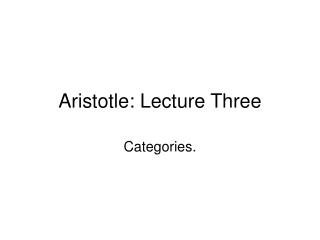 Aristotle: Lecture Three. Categories. Aristotle’s Theory of Change. Parmenides’ mistake according to Aristotle. “The first people to philosophize about the nature and truth of things…got..driven off course by inexperience…and said that nothing comes to be or passes away.” Physics I.8 191a24

Lecture Three - . a brief introduction to translation therories (principles) abroad and at home. types of translation.