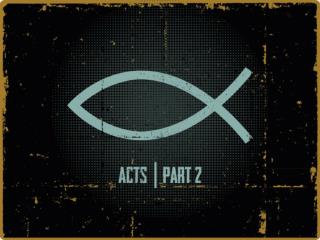 Acts 9:32-43. 32 As Peter traveled about the country, he went to visit the Lord's people who lived in Lydda . 33 There he found a man named Aeneas, who was paralyzed and had been bedridden for eight years.

(Acts 9:1-16 NKJV) - Then saul, still breathing threats and murder against the disciples of the lord, went to the high

Acts 8:14-15 - . now when the apostles who were at jerusalem heard that samaria had received the word of god, they sent

Acts 2:1–21 - . first lesson. the holy spirit comes at pentecost 1 when the day of pentecost came, they were all

The Church The Pillar and Buttress of the Truth - . church of christ at medina april 7 th , 2013. paul’s purpose in

Acts 17:11 (HCSB) - . 11 the people here were more open-minded than those in thessalonica, since they welcomed the

Acts 1:1-6:7 - “you will receive power when the holy spirit has come upon you; and you shall be my witnesses both in

Acts 12:1-4 - . 1 now about that time herod the king stretched out his hand to harass some from the church. 2 then he

The crucible Acts 1 &amp; 2 - . ultimate fishbowl session: where enlightenment meets students. have a discussion as

The Suffering Church - What would you do if someone wanted to stop you worshipping or learning about jesus ?. the

Scripture Workshop Episcopal Church of the Resurrection January 13, 2011 - The acts of the apostles risen christ and