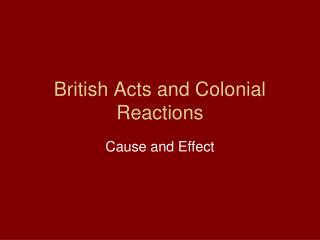 British Acts and Colonial Reactions. Cause and Effect. The Navigation Acts (1650). Colonists were required to transport goods only on British ships Certain goods (sugar, tobacco, indigo, furs) could only go to England. British Colonial Interiors - Encompassing the cultures and traditions, imbibing the artistry of interiors from india,

British Taxation Acts - . fill out your chart as we go through the following acts! . the navigation acts. proclamation of

British Missteps, Colonial Intransigence - . the road to revolution. focus question:. how can victory in a war cause a

British Missteps, Colonial Intransigence - . the road to revolution. focus question:. how can victory in a war cause a

The British Colonial System - . colonies had great deal of freedom after initial settlement due to british political

British Acts of Taxation - . look through the power point below and answer the following questions: what is the royal

British Actions and Colonists’ Reactions - . era 3-1. taxes – a sum of money demanded by a government for its support

Slavery, Freedom, and British Empire in the Colonial Period - Olaudah equano 1789 the interesting narrative of the life