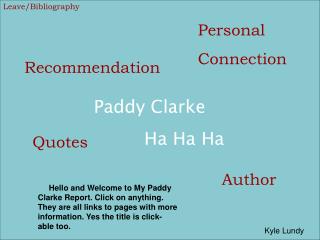 Leave/Bibliography. Personal Connection. Recommendation. Paddy Clarke Ha Ha Ha. Quotes. Author. Hello and Welcome to My Paddy Clarke Report. Click on anything. They are all links to pages with more information. Yes the title is click-able too. Kyle Lundy. IP: HA Myc HA - A. b. figure s1. knock down of fsp27 increases while over-expression of fsp27 decreases the release of

NOW TRY IT ON A REAL CIRCUIT!!!! HA HA HA!!! - See if you can trace the circuit around the office....find the red dot

Ke$ha - . by: lida boykin. how she got started . about two years ago ke$ha took her album she made and went to princes

HA Technologies - Full service digital creative agency. we have a strategy, experience and a proven track record in