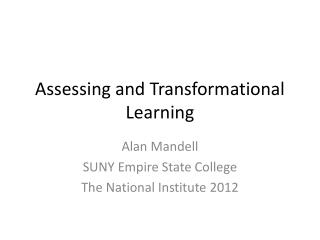 Transformational Learning - . transformative learning is about change—dramatic, fundamental change in the way we see

Assessing For Learning and Transfer - . pre-assessment. questions for us to consider: how do i define assessment? what is

Assessing Learning: Before and After - . prof. janice m. karlen director of business programs coordinator of credit for

Assessing Service-learning - . presented by dr. debra a. buchanan center for assessment of academic and student service