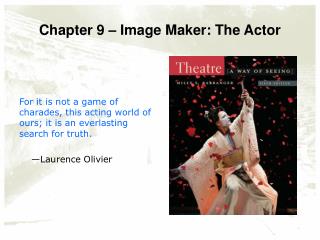 Chapter 9 – Image Maker: The Actor. For it is not a game of charades, this acting world of ours; it is an everlasting search for truth. — Laurence Olivier. Chapter Summary. Acting is the truthfulness and technique by which actors bring human presence onto the stage. Emotions - . and words for them. advantages of irrationality. you have an expensive possession, but it would cost you

Mahesh Babu - Telugu Actor - Ghatamaneni mahesh babu was born on 9th of august 1974 in chennai. he is the son of the

Chapter 10 Image Compression - . introduction and overview the field of image compression continues to grow at a rapid

Full Screen Image Something For Audience To Look At Before Presentations Starts - . title with background image. the

Creating a Positive Professional Image - . by tracy l. chenoweth. how do you define the term &quot;self

Introduction to Image Processing - . image processing. imaging in the visible and infrared bands. other examples.