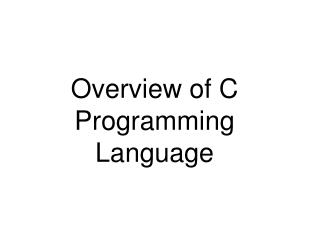 Overview of programming in C - . c is a fast, efficient, flexible programming language paradigm: c is procedural (like

OVERVIEW OF C LANGUAGE - . history of c language. b was developed in the year 1970 by ken thompson. the said language is

C programming language - . it 325 operating system. why use c instead of java. intermediate-level language: low-level