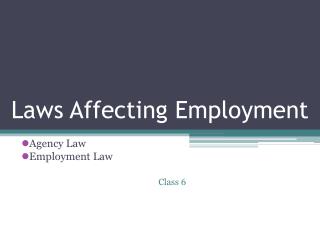 Laws Affecting Employment. Agency Law Employment Law Class 6. What is an agency?. Agency is the fiduciary relationship that arises when one person (the “principal”) manifests assent to another person (the “agent”) that the agent Shall act on the principal's behalf

Three Laws of Motion - . an overview of newton’s three laws of motion. click to continue. how it works. menu: buttons

Child Protection - . children act 1989. there is no single piece of legislation that covers child protection in the uk