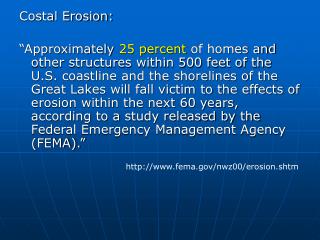 Preventing Soil Erosion - . what is erosion?. erosion is the process by which rocks and soil are transported from one

Erosion and Deposition - . agents, forces, and results. what caused this?. what is erosion?. erosion - moving of rock

CRCT Question - . what type of erosion best describes why the dust bowl in the 1930’s occurred? wind erosion landslide

Soil Erosion - . what is soil erosion?. a natural process of soil moving from one place to another. why is erosion a

Erosion- Movement of weathered rock - . deposition. the process of laying the weathered material down in a new location.

Erosion - . erosion. the movement of soil by wind or water to some new location. (naturally a slow process but speeds up

Chapter 4 Erosion and Deposition - . lesson 1 water erosion. how does moving water cause erosion?. erosion is the process

Wind Erosion - . wind is a major erosional agent in areas that are hot and dry. wind erosion is much weaker when compared

Erosion - . erosion is the movement of soil particles from one place to another by water or wind. water erosion: erosion

Stream Erosion and Transport - . erosion: hydraulic action – erosion caused by the movement of water against stream

Costal / port cities and their innovative development of maritime territories: - Perspectives for action and for the

Lesson 4: Splash Zone: Erosion in Action - . erosion. erosion is the wearing away of land by natural forces. erosion is a

Water Erosion - . where does a river get its water? where does this water ultimately come from?. moving water is the