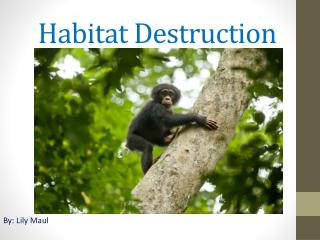 Habitat Destruction. By: Lily Maul. What is this issue about?.

Species Extinction- Reasons and Effects? - In biology and ecology, extinction is the termination of an organism or of a

Threats to Biodiversity - . habitat loss. happens when either natural disasters or human activities change the ecosystem

Rainforest Conservation - . by: nicole kurtz. location of tropical rainforests. rainforests are located near the equator

Oyster Habitat - Anthropogenic and environmental impacts on estuaries and methods used to mitigate these impacts. oyster

Habitat Destruction - . by: m olly h olbrook. what is this issue?

Habitat Fragmentation and Loss - . habitat fragmentation = the breaking apart of continuous habitat 1. reduction in the

The Ecosystem - . describe the structure of an ecosystem. relate the concept of habitat destruction to the loss of

Environmental Conservation - . biodiversity. number of species in an area biggest cause of loss of biodiversity is