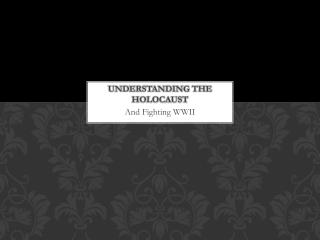 Understanding By Design: A “Backward Design” Approach to Teaching and Learning - . unlocking the keys to success and

Understanding VoIP - . dr. jonathan rosenberg chief technology strategist skype. what is this course about?. getting

Holocaust: Video Questions - . in the 1940s, who was driven out of their neighborhoods and homes? what is the holocaust?

Understanding the Viability of Large-Scale System Designs - . two sides of the same coin in a socio- economic design

Chapter 2 Understanding ourselves and others - . 2.1 2.2. personality basics balance. define personality and its four

Incorporating Literature into the Study of the Holocaust - . pam gannon teacher librarian september 2007. the soul of man