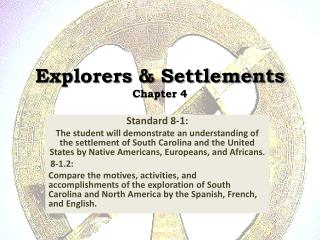 Explorers & Settlements Chapter 4. Standard 8-1: The student will demonstrate an understanding of the settlement of South Carolina and the United States by Native Americans, Europeans, and Africans . 8-1.2: Explorers - . what you need to know (aks 32a &amp; 32b) 32a - describe reasons for, obstacles to, and accomplishments

4 Famous Explorers - . sol 3.3 by ms. weinberg. long ago, before computers; before dvd players; long before airplanes or

Explorers - . social studies. how europeans saw the world. people only knew of three continents—europe, africa, and

EXPLORERS - . 1. what were the europeans searching for when they first started exploring the americas? a. places to start

Explorers - . explorer- a person who investigates unknown regions. . who are these people?. the vikings. very good job!.