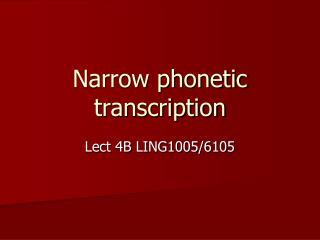 PHONETIC TRANSCRIPTION - . what is a phonetic transcription??. phonetic

Phonetic Terminology - . eva vahalíková , 270 621 autumn 2012. place and manner of articulation. what happens when ever

Phonetic alphabets - . chapter 2. spelling vs pronunciation. important to know that language was around long before

Phonetic Awareness Workshop - . what exactly is phonics? plain and simple phonics is the relationship between letters and