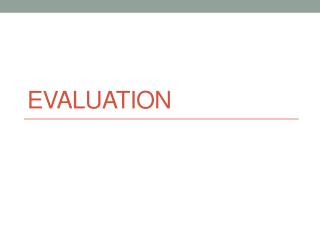 Evaluation . 1.In what ways does your media product use, develop or challenge forms and conventions of real media products?. The contents page should be bright and colourful to entice the reader.

ASSESSMENT AND EVALUATION TOOLS AND TECHNIQUES FOR CCE - . continuous comprehensive evaluation ?. continuous and

Chapter 6 System Test, Evaluation, and Validation - . april 2012. aims of this lecture. to understand the process of

Evaluation of Print Media - 12. evaluation of print media. the role of magazines and newspapers. high-involvement .

Evaluation - . evaluation . the purpose of evaluation is to demonstrate the utility, quality, and efficacy of a design

Chapter 6 - Supervision and Evaluation of the Marginal Teacher - . created by: deneise hammond, java robinson, and