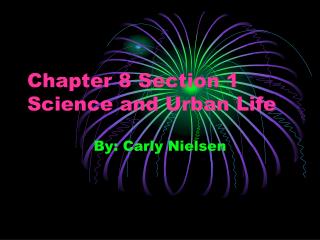 Unit 14 The Idiocy of Urban Life - Warm-up discussion. which life do you prefer, rural life or urban life?

Exploring and Classifying Life Section 1 of Chapter 1 - . what is science? science – an organized way of studying

Table of Contents - Chapter 1. the science of life. table of contents. section 1 the world of biology section 2 themes in

Science and Urban Life - . 16-1. technology changes cities. the brooklyn bridge: opened in 1883, one of the first

The Nature of science - . chapter 1. section 1.1 earth science. science is the process of observing and studying things

Chapter 1 The Study of Life - . section 1: introduction to biology. section 2: the nature of science. section 3: methods

Chapter 6 life science - . genes and dna. section 1 what does dna look like?. inherited characteristics are determined by

Chapter 1 - . the science of life. section 1 vocabulary pretest. made of one cell the smallest unit that can perform all